Are you eager to pick up some of the most recent and most buzzed-about young adult titles? If so, Reston Regional’s Teen Section’s shelves are packed with options for your reading appetite. Here are a few that you can head over and check out for yourself!

When We Were Magic, by Sarah Gailey

Alexis and her five best friends are your typical, close-knit group of high school girls. Oh, except for the magical powers that they share. And the fact that they have to help cover up an accidental murder on prom night. 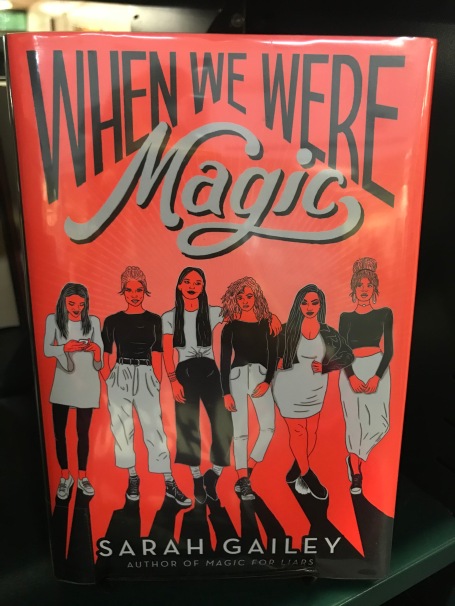 For fans of Greek mythology comes a retelling of the myth of Theseus and the minotaur…by way of reality television and The Hunger Games. Princess Ariadne agrees to help contestant Theseus win her family’s competition show, The Labyrinth Contest, but will helping him bring her family’s empire to ruins? 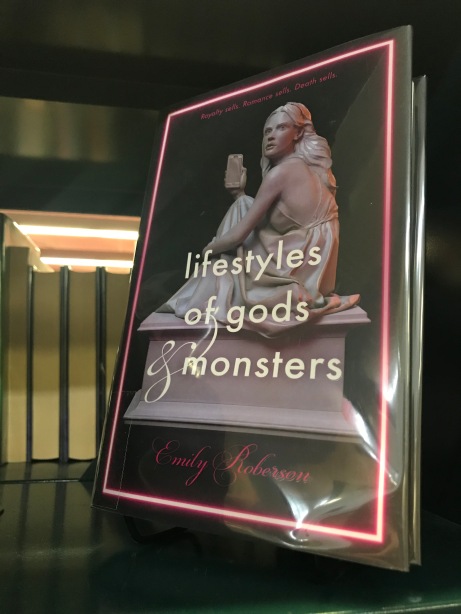 Someday We Will Fly, by Rachel DeWoskin

In 1940, teenage Lillia flees with her father and sister from Shanghai to escape persecution that Jewish people were facing in her home of Warsaw, Poland. Lillia embarks on a journey to help raise her sister, learn Chinese, make a living – and find her missing mother.

Cousins Ricki and Lana find themselves Freaky Friday-d during an unfortunately electrifying argument. Their journey to returning to their own bodies (as well as saving Ricki’s beloved drive-in theatre and Lana’s appearance at an online convention) is paved with crushes, convertibles, and chihuahuas.

Sisters Mae and Hannah winters are made to move from one coast to the other for their senior year of high school after a tropical storm claims the lives of their parents. Both struggle to deal with their losses, as well as stay tied to one another even as their circumstances pull them apart.

Place a hold or come check out these new titles today!

Mei is a 17-year-old in college, and she should have her whole life planned out, but she doesn’t. Then again, it doesn’t matter as her parents have planned it for her: pre-med at MIT, become a doctor, marry a Taiwanese Ivy League students (preapproved by her parents of course, and have children with him, preferably starting with a son. And if Mei doesn’t follow this plan, well, then she’ll end up like her brother: disowned, left on his own, with no financial or emotional support whatsoever. However, the one thing Mei does know is that she doesn’t want to be a doctor. She hates germs and everything related to medical school, but she still tries to convince herself it’ll be okay by shadowing a doctor on campus, but it’s hard to make yourself into the person you least want to be.

As Mei starts to figure out what she wants and who she is, away from her parents (mostly), she also discovers what really happened with her brother. He got disowned because he started dating the wrong girl. Mei starts to reconnect with them, and she starts to wonder if lying to herself and her family is worth it. She doesn’t want to end up like her brother, but she also doesn’t want to become the perfect Chinese girl, especially with her love for dance, and this new boy that’s caught her eye – a boy that is not Taiwanese. Can she fix everything before it all blows up in her face?

Gloria Chao has given us a heartfelt novel that shows us how to find the best of every situation and how to be true to ourselves, no matter what anyone says. American Panda will have you rooting for Mei all the way through, crying with her, laughing with her, and hoping for the best. American Panda is a story about acceptance and loving yourself, even in the face of adversity.

For the past few months, it’s been hard to get out of the house – even for something essential as finding summer reading! Luckily, if you feel like spending your last month before the online-school-year begins, Reston Regional’s Teen Advisory Board has plenty of recommendations to keep your imagination busy all August long. 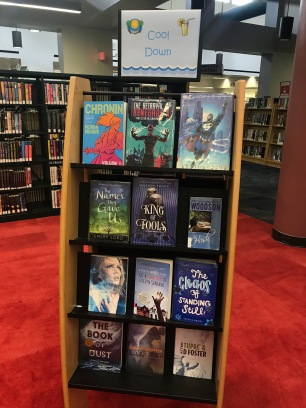 On our displays, you get the chance to judge a book by its cover – or at least its cover’s color palette. If you want to spice up your reading and get your heart beating, try Steampunk!, Puddin’, or All of This is True. If you’d prefer to slow down and relax by the pool, The Names They Gave Us, Hush, or The Chaos of Standing Still may be more your speed.

On our little board, you can see the results of an incredibly important poll: Reston reader’s favorite books! There’s still time to visit the teen section and have your voice heard by submitting your own pick. Here are a few of the hit books that Reston’s readers are revering:

Check back later this week to see the newest YA books that have hit Reston Regional’s shelves! Until then, happy reading, and some words of wisdom that can be found among the teen section’s shelves:

Here are some upcoming events that you can attend if you are interested. You can register and find more details about the events on the Fairfax County Public Library. Here is the link: https://www.fairfaxcounty.gov/

Virtual Yoga for All

Virtual Yoga For All

Here are some upcoming events that you can attend if you are interested. You can register and find more details on the Fairfax County Public Library website. Here is the link to the website: https://www.fairfaxcounty.gov/

Cook with us: Making Coconut Rice

Reston Library's Teen Advisory Board
Create a free website or blog at WordPress.com.