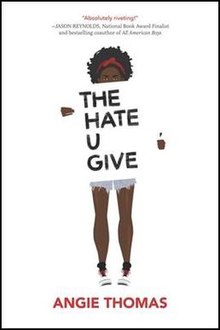 Two worlds. Sixteen year old Starr Carter lives in two vastly different worlds- one which consists of upper-crust suburban people who she attends her prep school with. The other being a poor neighborhood in which she grew up in. Both of her worlds are shook when she witnesses the police shooting her childhood best friend, Khalil, who was unarmed. After the incident, the murder receives national attention for all the wrong reasons. Khalil is given the reputation of having been a gangbanger, drug dealer, and thug. Starr is tore between the two worlds she inhabits but is determined to speak only the truth and uphold racial justice to fight for Khalil.

When Rachel Chu takes an international trip with her longtime boyfriend, Nicholas Young, to go his best friend’s wedding in Singapore, little did she know that she was in for a big surprise. As it turns out, her boyfriend comes from rich ( seriously ridiculously rich ) family and is considered as one of the country’s most elite bachelors. With this surprise comes a test of Rachel’s ability to withstand all the pressure from strange relatives, envious socialites, and –most of all– from Nick’s controlling mother.

3. Simon vs. the Homo Sapiens Agenda

Simon Spier is a 16 year old mustering the courage to unveil the truth about himself to his close and loving friends and family — the truth about his sexuality. Things take a change of path; however, when a blackmailer threatens to out his secret to the entire school when they find Simon’s exchange of emails with the anonymous Blue whom he has fallen for. Now, Simon must find a way to step out of his comfort zone while trying to discover the identity of Blue.

After her life completely changed when she became ten years old, Ruby has stayed in a brutal government detainment camp, Thurmond. While she is there, she survives a disease that kills of a majority of the children; however, she and the others comes out with something far more dangerous– terrifying abilities. She is on the run from the captors and joins other runways to find their safe haven- the East River. They must escape their pursuers who are attempting to take away their future and fight together by combining their unique powers.