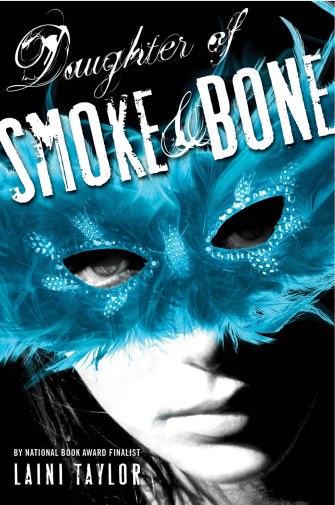 Daughter of Smoke and Bone by Laini Taylor is the first installment of the YA fantasy romance trilogy with the same name. Centered around a thousand-year-war between  angels and demons, it boasts of beautiful writing and masterful wordbuilding.

The concept for seraphim and chimaera and their war that has been plaguing Eretz for a millennium is brutal and well executed. Karou and Akiva’s romance shows readers the suffering and devastation felt by both sides. While the seraphim will never forget the massacre of Astrae, the chimaera equates that seraphim victory is synonymous to brutal slavery—it seems as if there will be no end. Despite this regression of civilization in general, we still see the culture that exists beneath the war—from the legends of godstars and Nitid and Ellai to the Serpentine, we catch glimpses of what could have been.

The style of the prose matches the story—mysterious and whimsical. Although a bit on the slow side at times, this style perfectly strikes a chord with the world Laini Taylor constructed. The introduction of Brimstone’s strange teeth-trading business and the currency of wishes ensures that the reader immediately falls hook, line, and sinker into the story. The choice for an initial setting in Prague is daring and an excellent complement to the atmosphere, but it isn’t the only unique location—the characters’ journeys take us to anywhere from Idaho to St. Petersburg, and even Eretz, the fantastical land only accessible by portal.

Daughter of Smoke and Bone is a solid first book, taking its time to establish each character with their individual stories and banes, introduce to you the world in which their lives play out and the world they find so contrasting with their own, and set up a string of events that ultimately lead to a sure leap into the next book. What is first perceived as an ordinary paranormal romance quickly transforms into a dark tragedy. The last page leaves readers hanging by their fingertips, promising them a more intense and even more otherworldly arc to come.

In person meetings are scheduled for the 2nd Wednesday of each month and run from 7:00-8:30pm at Reston Library.